Think of the various interests of classes and groups in our society as constituting an ecology in which political parties and organisations find niches to graze, hunt and be sustained.

The system can change and niches shift, narrow or broaden –  and in response the denizens that live in each niche must adapt or become extinct.

Alternatively, major fauna can begin to change for other systemic (or extra-systemic?) reasons and new spaces and niches close or open in response.

And a shockwave goes through the ecosystem and a number of species appear and/or  (oops) rapidly evolve, while others disappear.

Like all metaphors this one is going to break down the closer it gets to the real world, but I think something like this is happening to our political ecosystem – as the ANC’s DNA drifts towards the lumbering, complacent and patronage-networked side of the spectrum.

The gaps that are opening are in the middle classes, in the cities and amongst urban professionals – niches which (that?) are being vacated by the ANC as it settles its rump into the comfort of a sort of conservative, patriarchal, kleptocratic, bureaucratic and ethnic politico-ecological pouf-cushion.

I make  this observation as I watch (on eNews channel) the DA marching on Cosatu’s head-office in Johannesburg in a historical reversal of roles that I am struggling to get my head around.

I saw a Twitter post from Ranjeni Munusamy last night in which she said: “After the #DAmarch tomorrow, maybe nuclear powers will march to Greenpeace offices. Will make just as much sense”.

I get her dismay completely, but I suspect that is just my old assumptions about the shape of our political ecology dominating my brain.

Why shouldn’t the DA be going up directly against Cosatu?

That is what all this business about Zille attempting to recruit Vavi into the DA has been about.

They have been flirting – because they feel how close they are to each other – and now they are fighting, for exactly the same reasons.

On Sunday Ferial Haffajee wrote an extremely interesting piece in her City Press, pointing out that Cosatu is increasingly dominated by public sector unions  – and therefore increasingly represents “a middle”, rather than “a working” class.

The story uses this graphic: 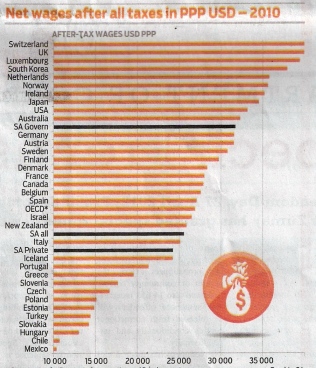 … which I think comes from a Uasa Federation study by economist Mike Schussler that points out that the employed in south Africa enjoy relatively good living conditions with an average salary of R13 200 and further that public sector workers are significantly better off than their private sector counterparts.

Cosatu has created a middle class where one did not exist in the 18 years of democracy. That it is funded by the public purse (funded in turn by you and I, the taxpayers) is neither here nor there. What is remarkable is how a federation that started as decidedly blue collar has altered the identity and social position of its members so quickly and so effectively that it could turn the public policy of tolling on its head.

So what is happening right now?

There is an inevitable frisson in the relationship between Cosatu and the DA.

As the opposing crowds gather in the streets of Johannesburg, the blue DA marchers versus the red Cosatu defenders – those for the youth wage subsidy and those against it – we might be expected to conclude that these are bitter class enemies.

I still think not – to my eyes I cannot distinguish them ethnically or class-wise … (but I accept that I might just not have cracked those codes).

The ANC – as well as agents of the state, I think – will strive mightily to prevent Cosatu from finding the DA – and vice versa.

As romantic literature suggests, love and hate lie alongside each other like geological strata – always in the process of metamorphosing, one into the other.

(Note – I think my various metaphors here don’t adequately take account of the differences in Cosatu – and ultimately break down on that point. I do think the public sector side of the federation is more middle-class and the private sector side more radical and competitive. However it is easier for the ANC to keep the public sector unions – the DA’s natural allies in class terms – on side because, ultimately, those unions are dependent on the state budget over which the ANC has control. Obviously there is a cost involved in the ANC buying off those middle class unions, and it is a cost ultimately borne by the unemployed … but that is an argument for another post. I am not sure if the DA will be able to capitalise on this contradiction, but it is not impossible that is precisely what the party is trying to do in Johannesburg as I write this.)