Herewith some of my latest news updates.

(Just as an aside before I start: I couldn’t help but smile at Richard Poplak’s seriously over-the-top take on the Nkandla report in Daily Maverick this morning: “But Madonsela has certainly nailed Zuma to history’s grimiest post—he will be forever remembered as a thief, a fool, and a Zulu man who was incapable of managing the affairs of his kraal … Jacob Zuma will not escape his fate as one of this country’s more reprehensible figures. And Nkandla will be the crown he wears as he slithers into historical ignominy” … anyone who reads this column probably realises that I am not overly enamoured of Jacob Zuma as our president, but Richard seems to think he is a sort of Vlad the Impaler in leopard skins, which I think is a metaphor too far.

… and while I am making asides did I just hear Gwede Mantashe throw Riah Phiyega under a bus for the fire pool/swimming pool confusion in the Presidential mansion? So she is going to take the fall for Nkandla and Marikana? Shem, as they say on Twitter.)

Zuma deemed guilty of misconduct, but not of misleading parliament

After a 28-month investigation, South African Public Protector Thuli Madonsela announced that President Jacob Zuma and his family had improperly benefited from upgrades to his private Nkandla home worth around ZAR 246mn. “Expenditure on Nkandla was excessive,” Ms Madonsela said and involved the “misappropriation of funds”.

Ms Madonsela said President Zuma knew of the scale of the Nkandla project and “failed to act in protection of state resources”, allowing extensive upgrades beyond security. She explicitly said Mr Zuma’s failure to protect the state’s interests during this saga amounted to “misconduct”, that his failure to protect state resources was a “violation” (of what we are not exactly sure yet) and that his conduct had been inconsistent with the constitution. However, she said that he did not wilfully mislead parliament on the matter. That would have been a criminal offence.

Mr Zuma will now have to respond to these findings to parliament within 14 days and repay some of the misappropriated funds. It doesn’t look like anyone will go to prison or be forced to resign and the actual practicalities of the crisis are not desperately serious for the ANC and President Zuma (or rather not in a new way … they were already quite serious in terms of general respect for the integrity of the President.)

Ms Madonsela recently described the function of the Public Protector as being to “curb excesses in the exercise of state power and control over state resources”. However, there is some confusion as to the status of her rulings and consequent recommendations to the president for remedial action.

Getting President Zuma to take remedial action against himself for the misuse of public money would seem like something of a non-starter. Already, ex-police chief Bheki Cele, former minister Dina Pule and Agriculture Minister Tina Joemat-Pettersson – all of whom had adverse findings against them by Ms Madonsela – have found their way onto the ANC’s election list.

Still, this is very much a negative for the African National Congress (ANC) – even more so than the general public expected, though probably not more than the ANC expected. The party knew the report was going to be damaging and has been stiffening its spine for some time, weighing up the costs of attacking Ms Madonsela – an illegal act – or taking it on the chin.

The party will lose votes as a result of this, but we think it was losing votes anyway because of Mr Zuma’s general probity (please see our most recent rough guide overleaf for an idea of how we think support is shaping up). Mr Zuma’s position in the ANC will be weakened (but remember he is strong in the sense that he controls the majority of powerful ANC structures).

Still, the brand value of the ANC is being damaged and this is likely to trigger a self-correcting mechanism. While the changes are still 40-60 against, we think a rescue mission by the party’s ‘old guard’ is now more likely  and that it might successfully mange to shift Mr Zuma aside by around 2016 (a sufficiently strong group just needs to emerge that can cut him a deal with proper guarantees). Obviously the worse the ANC does at the polls, the more the under performance is ascribed to the character and probity of the president … the more likely it is that such a group emerges and coheres to a degree that it is able to offer any enforceable guarantees. 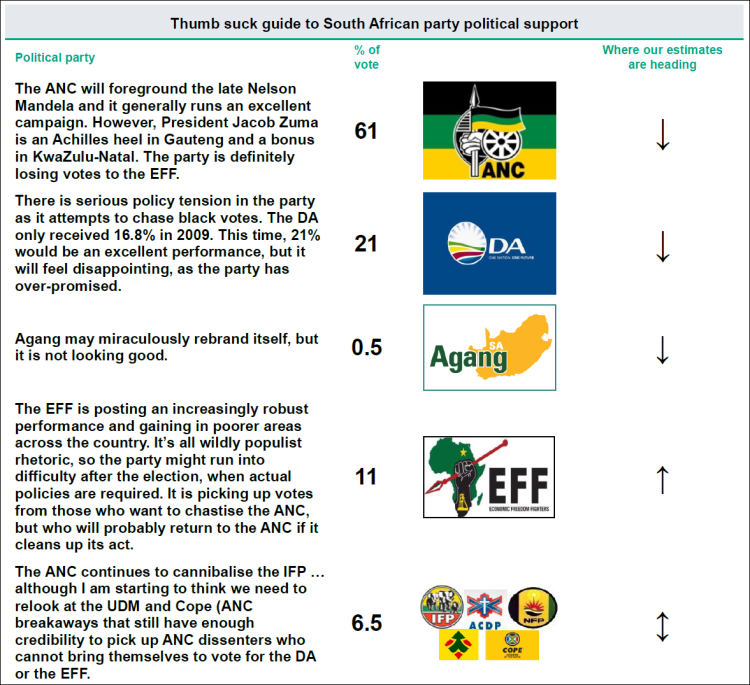 Last week, warm tributes were paid to former Finance Minister Trevor Manuel as he took his leave of parliament and it appeared that his sometimes fractious relationship with his party and cabinet colleagues would, for once, be smoothed over. However, in a high-profile Sunday Times interview, he proceeded to warn that “attacks on public bodies, such as the Public Protector and the courts, would weaken these institutions — and that democracy would then battle to survive”. ANC Secretary General Gwede Mathanshe responded sharply to Mr Manuel, saying: “We do not attack the public Protector, but criticise her where we feel we should … Trevor refuses to participate in the activities of the ANC NEC, and if you refuse such, you want to be a free agent.”

Trevor Manuel has been something of a ‘market darling’ and (according to himself and in his own words) the rand “fell out of bed” when the news broke that he had resigned after Thabo Mbeki had been recalled on 22 September 2008 (The Zuma Years, Richard Calland, August 2013, Zebra Press … read it, it really is quite good!!). There is no love lost between the country’s longest-serving finance minister and architect of the National Development Plan (NDP) and the incumbent leadership of his party.

In a coded farewell speech in parliament, he quoted a seemingly benign passage from a work by historian Tony Judt: “For thirty years, we have made a virtue out of the pursuit of material self-interest: indeed this very pursuit now constitutes whatever remains of our sense of collective purpose.” There were knowing nods all around, but Mr Manuel usefully forgot to mention the title of the book he was quoting, Ill Fares the Land. We expect Mr Manuel to emerge as a critic of the ANC in its present form, although he is unlikely to join any of the existing opposition parties.

Mr Manuel was also interviewed by the Business Times, in which he criticised the short-sighted way in which some trade unions were approaching negotiations, saying it has sparked a “race to the bottom”. He accused National Union of Metalworkers of South Africa (NUMSA) General Secretary Irvin Jim, who has constantly attacked the NDP, of “speaking a lot of rubbish”.

Tension in the mining sector under the twin pressures of serious labour instability and increasing government regulatory pressure is causing unusual fractures and pressures, according to Business Day and the Sunday Times, provoking something of a growing campaign of activism in some sectors of the ‘private-sector intelligentsia’, for want of a better term. Here are some of the highlights and lowlights of the tension (it gets complicated, but stick with it):

The Chamber of Mines said that “while further work is required on developing the regulations that will help give effect to the MPRDA Amendment Act, the chamber is firmly of the view that through this problem solving process, greater regulatory certainty is emerging for the mining sector.” Obviously, for the Chamber and the companies engaged in negotiating the details of legislation and regulation with government, or engaged in the constitutionally created structures of the labour market, there is no upside in attacking the government or the institutional framework. Equally obviously, key sections of the financial press disagree and are essentially sounding a call to arms and arguing that the growing institutional, regulatory and legislative hostility to the private sector is becoming a crisis.