By the way “deep blue” in the headline was not meant to be a riff on IBM’s chess playing supercomputer.

Rereading Part 1  I can see how someone might accuse me of being a little too certain about the shape of the future.  I am not running “deep blue” regressions and algorithms, modelling South Africa and the world, generating predictions x of y % accuracy with z % error margins … South … Africa … will … be … peachy … in …2021 … bidledeebidledee beep.

I have no real idea of what is going to happen in the future – and only the bare bones of an idea of the internal processes I go through to develop the views I advance here.

From time to time I investigate how we predict outcomes, and how we asses risks. I am interested in how our evolved systems (honed against sabre-toothed tigers and uncertain rainfall patterns, for example) apply in the kind of technology driven mega-societies we now inhabit – or, specifically, don’t apply i.e. that our ‘instinctive systems’ need to be suppressed or countermanded if we hope to get it right in certain situations. But that is not what I am doing in these quick pre-Mangaung notes.

The “deep blue” of the headline was actually a reference to being bleak, sad, cold and lonely.

Which leads me to:

Who are the demagogic populist, proto-fascists* now? 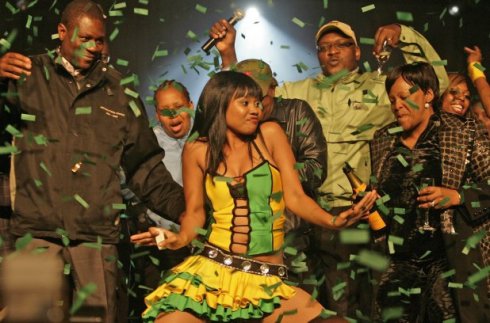 The ANC will (initially) combat the threat of losing support by becoming more ‘demagogic populist’, rural conservative and based in the lumpen classes – basically, by drifting to the right

In December 2010 I wrote an article in GQ Magazine under the headline: “Can you hear the drums?” with a concluding paragraph that read:

In the year 2010, anger and resentment … bubbled over  … The winners still have their stuff, but they are clutching it more tightly to their chests, and for the first time in 16 years they are straining for the hint, a sound or a smell, of what might be coming for them out of the night.

Two ‘crises’ (or warnings) that occured this year are the equivalent of the scary sound of drums in the night for the incumbent ANC elite. The first warning is Marikana and the second, linked, warning is the traction Julius Malema’s manipulative populism was able to achieve amongst some sections of the disenfranchised youth.

I made some of these links in my coverage of Marikana here.

I think the ANC will ride out the gradually escalating social and industrial unrest by becoming the “proto-fascist” and “demogogic populist” movement that Zuma’s SACP ally accuses Malema of representing (here for the context of that). This ANC, under this president is being drawn inexorably, by the logic of its own politics, into the territory of rural patriarchy with its natural links to the fear and hatred of education and any form of gender equality. (I am not going to argue this out here … just take a glance at the saga around The Spear, the Traditional Courts Bill and various comments about women and about “clever blacks” and appeals to African ways of doing things over foreign ways of the same – see TrustLaw’s Katy Migiro’s excellent takes here  and here.)

Thus (forgive the leap) the ANC begins to lose the urban industrial working class (on the road to becoming much more like a classic middle class and deeply opposed to the looting of the state),  the professional classes (already at that destination), the productive and rule based businesses, local and global, and it eventually begins to lose the pirates looking to launder their money and ‘go straight’ (as I argued in Part 1).

This leaves the ANC with the rural poor, the marginalised unemployed, a bureaucratic elite within the state (those last three dependent on state spending through the public sector wage bill and social grants) and global resource privateers who powerfully thrive in countries like this with leaders like these.

Initially the ANC might get even higher turnout at its rallies (especially with free food and t-shirts and sexy young people dancing between the rabble-rousing and the singing of Umshini wami). But eventually the class and demographic changes of the society impact upon the party – reformat it, split it, renew it … change the political ecology in which it moves and feeds.

You will see from my next post that I do not only think the ANC is a useless bubble of foul smelling gas buffeted on the sea of history. The ANC, in my analysis, has become a most significant and material influence for and against my upbeat scenario … a sort of deranged midwife at the happy birth.

* The term “demagogic populists, proto-fascist” is from various SACP documents and was code for Julius Malema (and, I suspect, in slightly early versions, a code for Tokyo Sexwale). This is what the SACP had to say about it:

It was the SACP at the 2009 Special National Congress that first identified clearly the ideological and underlying class character of what we called the “new tendency”. We described it as a populist, bourgeois nationalist ideological tendency, with deeply worrying demagogic, proto-fascist features. It was the SACP that pointed out the connections between the public face and pseudo-militant rhetoric of this tendency and its behind-the-scenes class backing. It was a tendency funded and resourced by narrow BEE elements still involved in a rabid primitive accumulation process, based on a parasitic access to state power. It was a bourgeois nationalist tendency that sought to mobilize a populist mass base, particularly amongst a disaffected youth, to act as the shock troops to advance personal accumulation agendas.

The SACP must feel free to pat itself on the back, but the reality is that party took on the straw man of  Kebble/Malema/Sexwale and backed – to the hilt – the real demagogic, proto-fascist tendency – the one with real power … and the one with real patronage to dispense. (That last bit explaining why this SACP has backed the Nkandla Crew)

That SACP quote is from here. For my explanation of how that all fits together with the nationalisation of mines call and host of other issues here (again) .