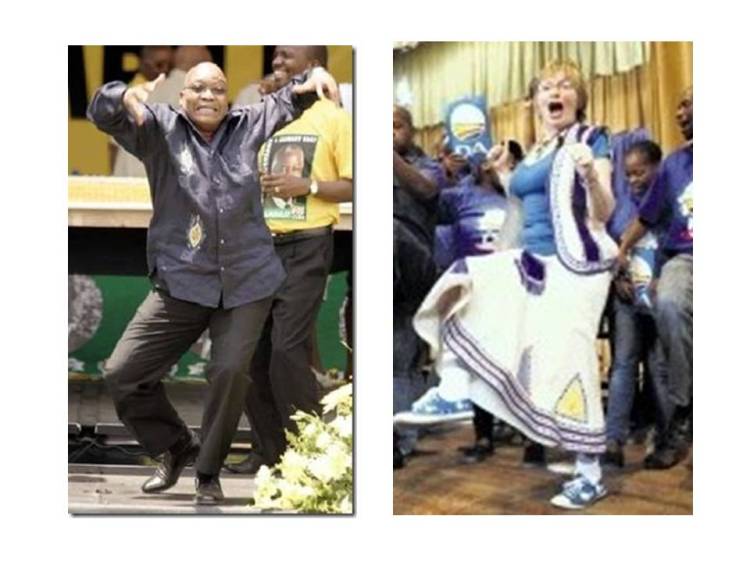 Our leaders dancing for our votes reminds me of a poem Michael Ondaatje wrote called The Elimination Dance. A version of this dance appears in cultures and countries around the world.

The rules are that a caller shouts out particular categories of people or people who have undergone a particular experience. When you are called  you must leave the dance floor immediately.

There is no hidden political message – apart from the last line … and the silly part of myself that wishes they would all get off the stage –  it was just an excuse to use the composite picture I just made and because I thought the poem might charm and delight some of you.

The quotes in the beginning are placed by Ondaatje himself in the original poem:

‘Toll we be roten, kan we not rypen’
GEOFFREY CHAUCER

Those who are allergic to the sea

Those who have resisted depravity

Men who shave off beards in stages, pausing to take photographs

Gentlemen who have placed a microphone beside a naked woman’s stomach after lunch and later, after slowing down the sound considerably, have sold these noises on the open market as whale songs

Any person who has had the following dream. You are in a subway station of a major city. At the far end you see a coffee machine. You put in two coins. The Holy Grail drops down. Then blood pours into the chalice.

Any person who has lost a urine sample in the mail

Those who have filled in a bilingual and confidential pig survey from Statistics Canada. (Une enquệte sur les porcs, strictement confidentielle)

Those who have accidentally stapled themselves

Anyone who has been penetrated by a mountie

Any woman whose i.u.d. has set off an alarm system at the airport

Men who have never touched a whippet

Women who gave up the accordian because of pinched breasts

Those who have pissed out of the back of moving trucks

Those who have so much as contemplated the possibility of creeping up to one’s enemy with two Bic lighters, pressing simultaneously the butane switches— one into each nostril— and so gassing him to death

Literary critics who have swum the Hellespont

Any writer who has been photographed for the jacket of a book in one of the following poses: sitting in the back of a 1956 Dodge with two roosters; in a tuxedo with the Sydney Opera House in the distance; studying the vanishing point on a jar of Dutch Cleanser; against a gravestone with dramatic back lighting; with a false nose on; in the vicinity of Macchu Pichu; or sitting in a study and looking intensely at one’s own book

The person who borrowed my Martin Beck thriller, read it in a sauna which melted the glue off the spine so the pages drifted to the floor, stapled them together and returned the book, thinking I wouldn’t notice

8 thoughts on “Because I thought it might brighten your day”