The quarterly Labour Force Survey from Statistics SA is a timely reminder of what really matters when assessing political risk associated with investing in South Africa.

Julius Malema’s predations,  Jacob Zuma’s extraordinary sex life, Cosatu’s and the SACP’s millennial economics would just be irritating noise, unless they relate to the country’s chronic levels of unemployment, poverty and inequality – and the racial overlay of the same.

Think of society as a complex system and unemployment, poverty and inequality as deep tectonic stresses that honeycomb and hollow out the underpinnings and foundations of the system. As the stresses grow so does the potential for catastrophic events.

South Africa has the highest jobless rate of the 62 counties tracked by Bloomberg and the unemployment rate rose for a fourth consecutive quarter in the first three months of this year – that’s a 1.3% contraction in employment or the loss of 171 000 jobs in that period. The following graph shows the general trend – and also demonstrates slight seasonal increases in the fourth quarters of 2008 and 2009, the result of the obvious stimulations from the holiday season and the rush to get things done. 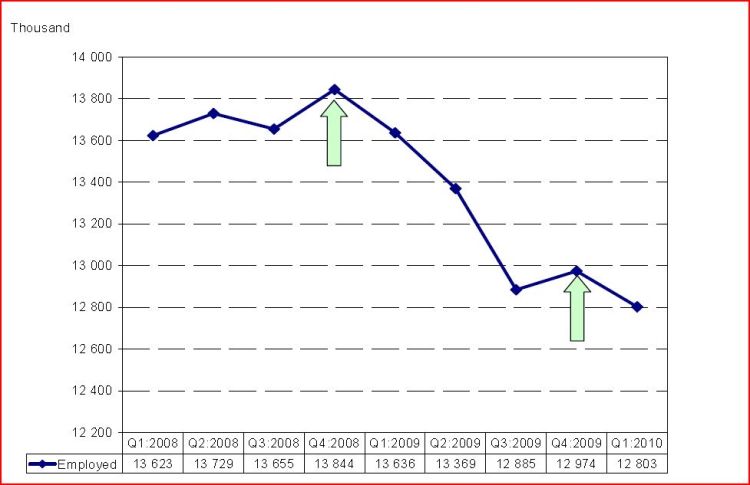 Employment contracted in all industries but Agriculture, Private Households, Transport and Community and Social Services. 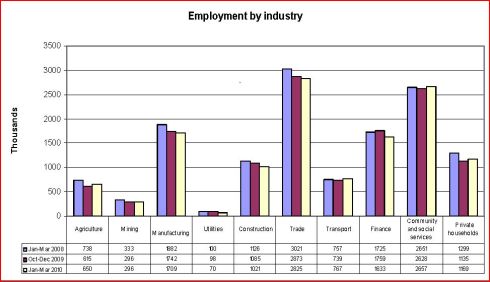 Read this alongside these points:

Add to this the dismal outcomes of Affirmative Action and Black Economic Empowerment and you have a system shot through with instability.

When the bombast coming from the political and economic elite draws the national focus away from the real issues and challenges, then the trouble we are in becomes more threatening and more concerning to investors.

6 thoughts on “Unemployment growth is a deep systemic threat”